Our cemetery has been serving the Greater Metropolitan Area since 1893.

Plan for the Future

We are a full service non-sectarian cemetery and have graves that allow for 3 deep burials. Call our office for further details about graves, costs and locations.

All times are subject to change without notice. All questions should be directed to the Funeral Home.

Interment search allows for a comprehensive search of individuals buried at our cemetery. Once you find the person you are searching for, you will be able to click on their name to view more information. On that page, you can get directions directly to the gravesite.

Cemetery management is identifying the Veterans who served in the United States Armed Services and are now buried in our Cemetery. If you are aware of any Veteran buried in the Cemetery, please search below and then select the Veteran, add the war in which they served in and identify the branch of the armed services and submit. We will update our records accordingly. If you prefer to call the office with this information, you may do so by dialing (718) 939-9405. Thank you.

Once the grave or plot has been placed under Endowed Care, the principal amount is invested in securities which are legal for Trust Funds according to the laws of the State of New York. The principal amount remains intact as long as the Trust Fund exists. Only the income on the principal amount is used to care for and maintain the plot or grave.
All graves under Endowed Care are cut and trimmed four to five times per year at periodic intervals beginning in May and ending in October. Planting will be done during the early spring and late fall months. Hydro Seed will be done in the late fall.

Seasonal Care is an optional service available to those who wish to pay for it. Seasonal Care must be prepaid annually in accordance with the charges posted and in effect for that year. The terms "Annual Care" and "Seasonal Care" are used interchangeably and shall mean the mowing of grass and pruning of shrubs four to five times per year at periodic intervals beginning in May and ending in October. Seasonal Care does not include the planting of new shrubs or grass.

Pay for a picture of your loved ones' gravesite. Cedar Grove Cemetery charges $13.50 for a picture of the gravesite which can be paid online with a credit card. We usually have the picture emailed to you within one week. To order a photo, search for the interment and then click on their name to view their interment page. On that page, click the button "Pay for Photo" to submit your photo request.

Cedar Grove Cemetery has delineated certain areas of the Cemetery as Cemetery Care areas. Cemetery Care is included with the purchase of graves in these areas. These areas are usually restricted to lawn plan only. Cemetery Care includes the cutting of grass four to five times per year at periodic intervals beginning in May and ending in October. Cemetery Care does not include the replanting of dead grass.

Cedar Grove has graves for sale. Call our office for further details about cost and location. Note: Graves are not sold sight unseen. 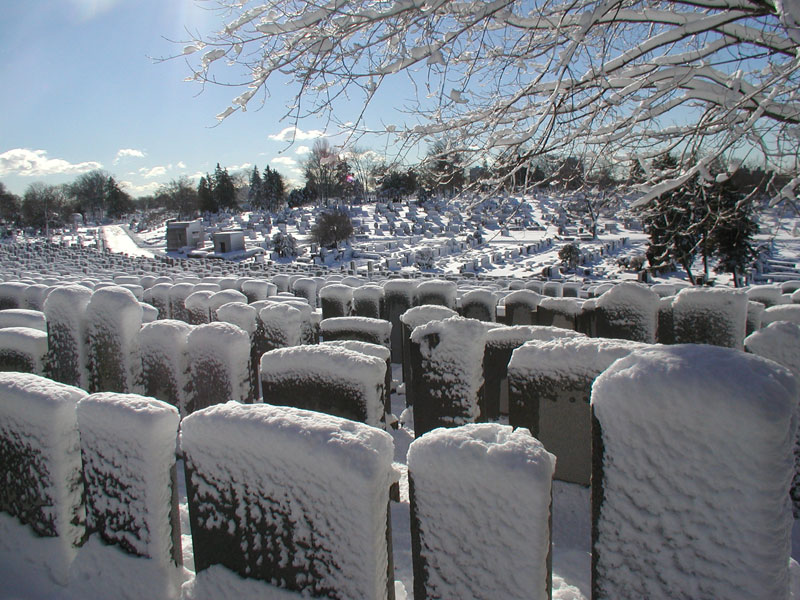 The first recorded burial at Cedar Grove Cemetery was on July 27, 1893.

Cedar Grove Cemetery is governed by the New York State Not-For-Profit Corporation Laws. Cedar Grove, like many non-sectarian cemeteries, has graves that allow for 3 deep burials. Our regulations do not require a vault for burial. Burials of cremated remains and in private mausoleums are common place at Cedar Grove.

Care can be provided on a seasonal basis or an endowment can be created so that graves can be tended to in future years.

Cedar Grove Cemetery does not staff an office regularly. All inquires must be directed to the Mount Hebron Cemetery office, which is open Sunday through Friday, 9am to 3:50pm. The Mount Hebron office is located at 130-04 Horace Harding Expy, Flushing, NY 11367

The cemetery closes on some holidays. View our Holiday Schedule

Use Google Maps to get directions from your location to 134-16 Horace Harding Expy, Flushing, NY 11367

See our directions page to view and print written instructions on the best way to drive to the cemetery from popular points (e.g. JFK Airport): Directions from Common Locations